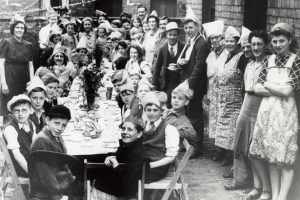 There are very few people left alive who have anything other than a childhood memory of that day in 1945 when World War 2 ended in Europe. My own parents, long since passed away, told me all about it and remembered it well from being young adults in Derby. My wife’s parents were still children, in London, on that day and they likewise have strong memories, mostly of the street party and pooled-ration-book feast. By our standards it was plain but for them, after years of hardship, it was time to gorge.

At St Katherine’s Care, we believe it is important to help people keep memories alive and the memories of VE day are for a generation (now in advanced years) more than ‘just’ treasured.

Why? Because something I have seen as we grow St Katherine’s Care, taking on more and a greater variety of customers, is that memory fulfils a key role in our mental well-being. It goes beyond the warm and fuzzy feelings as we re-live events in our heads; we remember how it was to bite into that cake, to take a first drink, to steal a first kiss, to dance to that well-known tune, to be part of something that was a community celebration. All those things and many more happened on VE day 1945.

We know that memories are evocative – not all are good, and there was much hardship, cruelty and violence both in the war years and afterwards, but memory is a funny thing. You can use it to define who you are, modifying it as you progress through life so that some things that were bad (but not too bad) get re-written in your head. Events that were good (but maybe not that good) get bigged-up and become something else. We’ve all been there!

By looking back on events, we can say “This is how I felt then because I’m that person” and so memories become an anchor for our lives. So many of our customers at St Kath’s are well into their 80’s and 90’s and we know they spend a lot of time thinking about the old days – that’s human nature, after all.

One of the undesirable things that happens with old age, though, is the appearance of dementia and it takes people in many different ways. A little forgetfulness, some unaccountable eccentricity, well that’s one end of the spectrum, but those working in care often see the greater extremes, such as Alzheimers. We believe  memories are never lost, except at the most extreme end of the dementia spectrum, and then again, who can really say? When someone is uncommunicative, staring off into the distance, out of touch with the world around them, are they living in their memories?

We at St Kath’s think memories are important, and I’d go so far as to say ‘vital’. Enabling people to experience memories again through sharing them improves mental state, even in those with advanced Alzheimers, even if it’s something like music or smells. Who can resist a treasured tune, or the waft of fresh bread, chocolate or flowers? The mental reinforcement that memory brings can last a lot longer than you might think and we can use that as a positive force in care.

It was good to remember VE day, because that was the beginning of the end of austerity and hardship for many and the start of being able to rebuild the country after the defeat of an existential threat. But there’s been another 75 years of memories since, and a couple of generations who want to treasure them; by keeping them alive for our customers, we’re giving the gift of revisiting the past, helping them remember who they are, and the love they and the people around them felt for each other.

Touching base with the past helps us hang onto the present and, who knows, perhaps look to the future?